“Masaaki Noda The Arc of My Life in Art: 50 Years — From New York to the World” 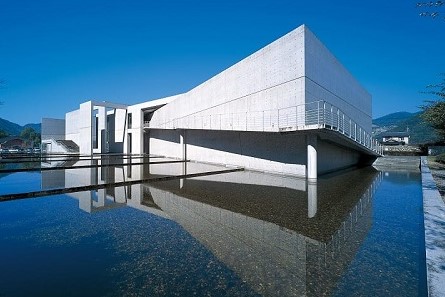 “Masaaki Noda The Arc of My Life in Art: 50 Years — From New York to the World”

TAKAHASHI CITY, OKAYAMA PREFECTURE, JAPAN. – The Takahashi City Nariwa Museum of Art is presenting “Masaaki Noda The Arc of My Life in Art: 50 Years From New York to the World”, September 17- December 18, 2022, a retrospective of the work of the artist Masaaki Noda, from his native Japan to New York City highlighting his painting and sculpture.

Born in Fukuyama, Hiroshima, Prefecture in 1949, Masaaki Noda received his early training in art in Japan, and in 1977 moved to New York City to attend The Art Students League. Noda has continued his relationship to Japan, spending part of his time every year in Japan after nine years. Initially, Noda focused on silk screens and paintings and in the 90’s has moved as well into sculpture.

His stainless steel sculptures are known for their interaction with the changing environment of sun, rain, snow, clouds, vegetation with the sculptures becoming part of the surroundings. Each season and each change of weather provide a new experiences.

The Nariwa Museum of Art collection is primarily devoted to Japanese Impressionism and the work of Torajiro Kojima. Kojima was a contemporary of the great Yumeji and represents what many consider the belle époque of art internationally.

In 1994, the Museum opened a new building designed by Tadao Ando, a internationally known and prolific architect architect. His museum designs include the Modern Art Museum of Fort Worth, Himeji City Museum of Literature, Akita Museum of Art, Chikatsu Asuka Museum, the Suntory Museum, The Hansol Museum (S. Korea),  and many others.

Tadao Ando’s body of work is known for the creative use of natural light and for structures that follow natural forms of the landscape, rather than disturbing the landscape by making it conform to the constructed space of a building. Ando’s buildings are often characterized by complex three-dimensional circulation paths. These paths weave in between interior and exterior spaces formed both inside large-scale geometric shapes and in the spaces between them. ” https://en.wikipedia.org/wiki/Tadao_Ando

The exhibition features 24 works of Noda including nine sculptures, four of which were completed for this exhibit including a cast stainless steel work and a granite work. See https://masaakinoda.com/category/nariwa/. 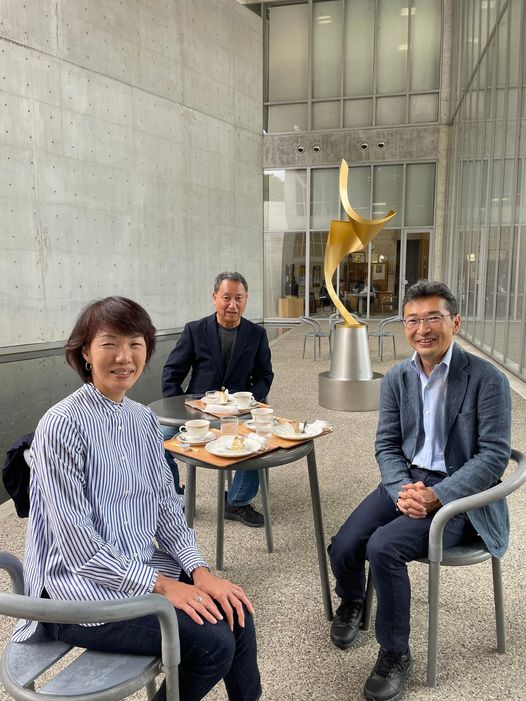 I went to Takahashi City’s Nariwa Art Museum’s special exhibition “Masaaki Noda: The Arc of My Life –  50 Years  – From New York to the World” (held until December 18th) and with my wife Shoko had a pleasant discussion with Mr. Noda.

This museum was established to honor the achievements of Torajiro Kojima, a painter born in Nariwa. The museum is a unique concrete architecture by Tadao Ando.

Fukuyama-born Masaaki Noda  has been based in New York since 1977, and has been active mainly in printmaking and sculpture. We’ve known each other for a quarter of a century since we first met in Matsumoto in 1996.

Noda participated in “The Open Mind of Lafcadio Hearn” and installed monuments with the same name in Athens, Lefkada, and Matsue.

A model of this sculpture is included in the Nariwa show.

The monument standing next to the Matsue Prefectural Art Museum offers a view of the setting sun over Lake Shinji in its heart-shaped space.

Noda himself recalled that the sculpture was “a notable event in my life as an artist and in my art career.”

The Open Mind project has gone beyond simply honoring the artist Hearn, but has become a major touchstone for advancing Noda to the next stage as an artist.

The compatibility between the spaces of Ando’s architecture and Mr. Noda’s sculptures, as a result, brings out the best of both worlds.

In particular, Noda’s outdoor work, which is set against the background of a cubic concrete pond inhabited by greenery and killifish, maintains dignity and completely blends into the space enhancing Ando’s architecture as well as Noda’s sculptures.